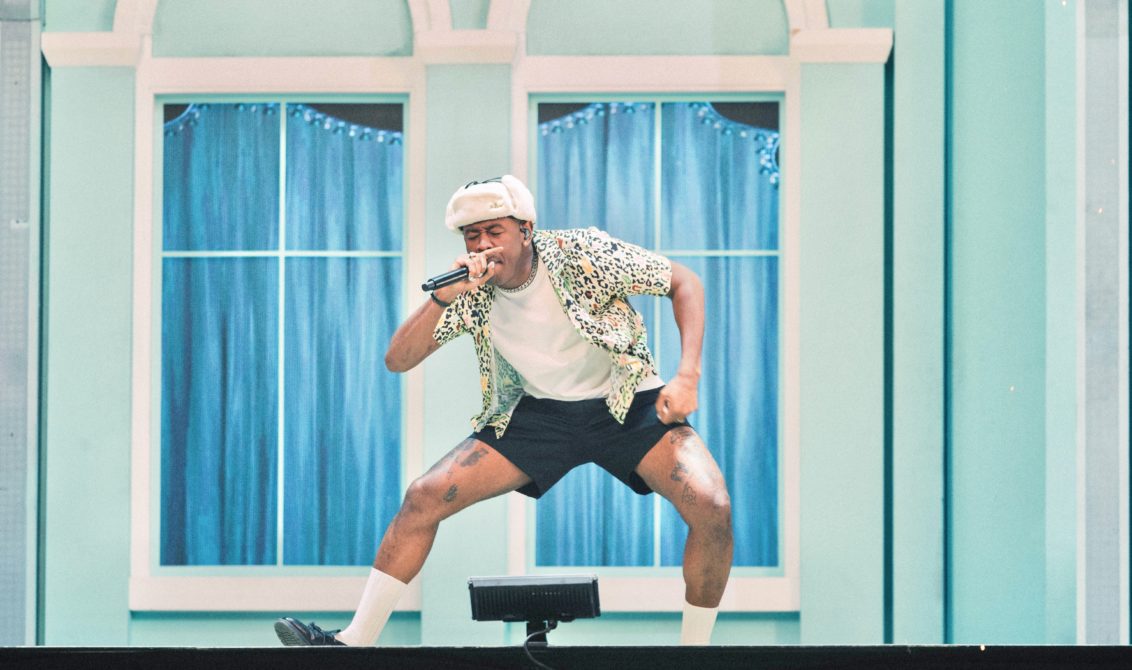 When it was announced in August that Tyler, the Creator would be touring with Vince Staples and Kali Uchis, it felt like a delusion. With the pandemic making a resurgence, the lineup seemed fantastical for a concert at Charlotte’s Bojangles’ Coliseum. The show wasn’t far from a fantasy; with four acts utilizing the entire floor space for intricate staging and lighting, something special was brewing. Vintage sweater vests, cardigans, blazers, and straight-leg chinos galore, it felt like walking into a Wes Anderson movie audition. Merch lines were wrapped around the coliseum as devoted fans rocking bucket hats and Golf Wang apparel patiently waited to cop their official Call Me If You Get Lost tour gear.

The stage was set, multiple stages in fact. The opening act, odd-ball “fashion” rapper-singer Teezo Touchdown’s Home Improvement-themed “Handyman” music video played the backdrop for his performance. With his hype man pacing from side to side screeching his motto “Get the mid out the streets,” before his entrance, Teezo popped out from behind a door waiving a chainsaw wearing a denim skirt, black wig and cowboy boots. It was a lot to take in, but it didn’t feel out of place. Engaged fans in the GA floor area, which was grossly undersold (probably due to the recent festival tragedy at Astroworld), were jumping for the bass-heavy tracks and often repetitive lyrics. Many who weren’t familiar with Teezo’s work probably wondered if this was comedy, art, music or fashion, but the energy was well-received.

Immediately after Teezo Touchdown’s set, the focus slowly shifted to the opposite side of the room, where a large color-transforming platform was laid atop the stage. Smoke rose from the ground as eerie synths from the song “Blue Suede” came on, in tandem with haunting blue lights synced with a rumbling bass. The anticipation was as thick as the smoke when Long Beach, California’s Vince Staples emerged.

While the longtime Odd Future collaborator’s set wasn’t extravagant. Sometimes dark but sleek, the set was representative of Staples’ music. Periodically checking in with the audience, he turned the energy up for “FUN!” from his 2017 album Big Fish Theory, where the chorus reflected the youthful energy of the evening: “We just wanna have fun / We don’t wanna fuck up nothin’ / And we don’t give a fuck ’bout nothin’.” Staples also played some of his more recent work, like “Are You With That” from his latest self-titled album, and “Magic” from his forthcoming project, Ramona Park Broke My Heart. The bouncy West Coast beat and snares of “Big Fish” reverberated through the coliseum as he finished his set with his most popular track, “Norf Norf.”

After Staples’ set ended, it was evident from the “Kali!” chants and hysterical screaming that a large part of the audience was equally thrilled to see the Colombian-American singer Kali Uchis as they were the headliner. Lights dimmed on the massive black drapes over the stage, waving like the dark sea, and Uchis was unveiled to emphatic screams from the audience. She was tied to a pole as three backup dancers crawled up the stage structure to untie her as the synths from “Dead To Me” played from her 2018 breakout debut album, Isolation. Strolling down the stage in a bedazzled gypsy-style outfit, the entrance was grand.

Swirling her hips for the Grammy Award-winning collaboration with Kaytranada, “10%,” Uchis filled the large space with her seductive energy, interpretive dancers, and visual effects. Mixing in some of her Spanish-language tracks from Sin Miedo (del Amor y Otros Demonios), Uchis worked up a mild sweat during her near hour-long set. Walking side stage briefly after the bubble gum pop of “Ridin Round” from her debut EP, Por Vida, she put on a feathery red robe for “i want war (BUT I NEED PEACE),” a song from 2020’s four-song EP, To Feel Alive.

As sounds of rain engulfed the coliseum and the overhead lights flickered simulating lightning, the funky notes to “After The Storm” played as Uchis’ voice echoed and a giant screen behind her shifted with the theme of the song. The track features funk legend Bootsy Collins and Tyler, the Creator on the album version, serving as sort of a prelude to the spectacle ahead.

Right before 10 p.m. a video played on the big screen featuring a flyover of a mountainous landscape, in Geneva, Switzerland perhaps, a place referenced multiple times in Tyler, the Creator’s latest and most cohesive project to date, Call Me If You Get Lost. With a rhythmic chant and flutes scoring the visuals, Tyler’s voice emerged as he rose standing inside of a seafoam green 1939 Rolls Royce Wraith for the intro song, “SIR BAUDELAIRE.” After the song, Tyler closed his eyes looking upward, preparing for the nearly 90-minute production ahead to thousands of screaming fans.

Hopping out of the car, a Victorian-style home was unveiled behind him on stage. Performing “CORSO,” Tyler took a casual stroll to the second level of the house, and the hype commenced as the horns blared for “LEMONHEAD” and fans started jumping. Playing the first three songs of CMIYGL in sequential order, Tyler worked the crowd before spitting the lyrics to “LUMBERJACK,” a nod to the inspiration for the intricate set design, “Rolls Royce pull up, Black boy hop out / Shoutout to my mother and my father, didn’t pull out,” walking a suitcase from the trunk of the Rolls Royce to the front door.

Cruising through the crowd on the much-talked-about boat for “WUSYANAME,” Tyler was transported on the mechanical prop to the second stage. The setup and progression of the show utilized the space well, connecting fans from all angles, and allowing plenty of room on the floor for the young crowd to physically follow the journey.

“Boredom” had the audience singing along to the Rex Orange County intro and chorus as the second stage was dressed with high shrubs for an outdoorsy safari-like vibe. Dancing around the stage to “911 / Mr. Lonely” with a deep red glow from the complex lighting rig, he slowed it down for the Uchis-featured song “See You Again,” rounding out three tracks from 2017’s Flower Boy. As the show paused, the bright lights shined on Tyler, and he candidly asked, “Y’all don’t mind if I go through my discography, right?” The audience erupted in screams, guessing as to which song he’d play next. Without another word, the beat for “She” from Tyler’s 2012 debut album Goblin played and the masses recited the rap and sang along to the Frank Ocean chorus.

There’s no question Tyler saved his best for last. Chilling strings played the intro to “Who Dat Boy” as the lights flashed green and blue in every direction, building up to the beat drop like a Hitchcock film score. Flames shot up in front of the makeshift stage house, as a shadow of A$AP Rocky appeared inside the house for his verse. Tyler showed off his best dance moves for “I Think,” surprisingly the first song of the evening from the Grammy Award-winning album, IGOR. Making another lap inside the house, after Playboi Carti’s verse on “Earfquake,” sparks illuminated the coliseum, cascading from the stage structure like a waterfall.

After a fiery head-banging rendition of “NEW MAGIC WAND,” a turnt-up version of “RUNITUP” served as the grand finale with fireworks exploding from the stage. Tyler concluded his enchanting set with some simple but strange advice: “Hold your dick, and get home safe.” As the lights dimmed, a single spotlight shined on Tyler as he picked up his suitcase and gave one last Mr. Rogers-style wave before entering the house and exiting the stage.

It’s evident Tyler, the Creator has matured as a human and artist over his decade-long career. Although still a little quirky and maybe childish at times, it’s clear in his lyrics, behavior and subject matter that he is evolving. With a wondrous production and set design accompanying a stellar album, and a tour with an eclectic cast of opening acts, we can only hope this will inspire more creative energy and evolution in hip-hop.

Check out the remaining dates for Tyler, the Creator’s Call Me If You Get Lost tour.