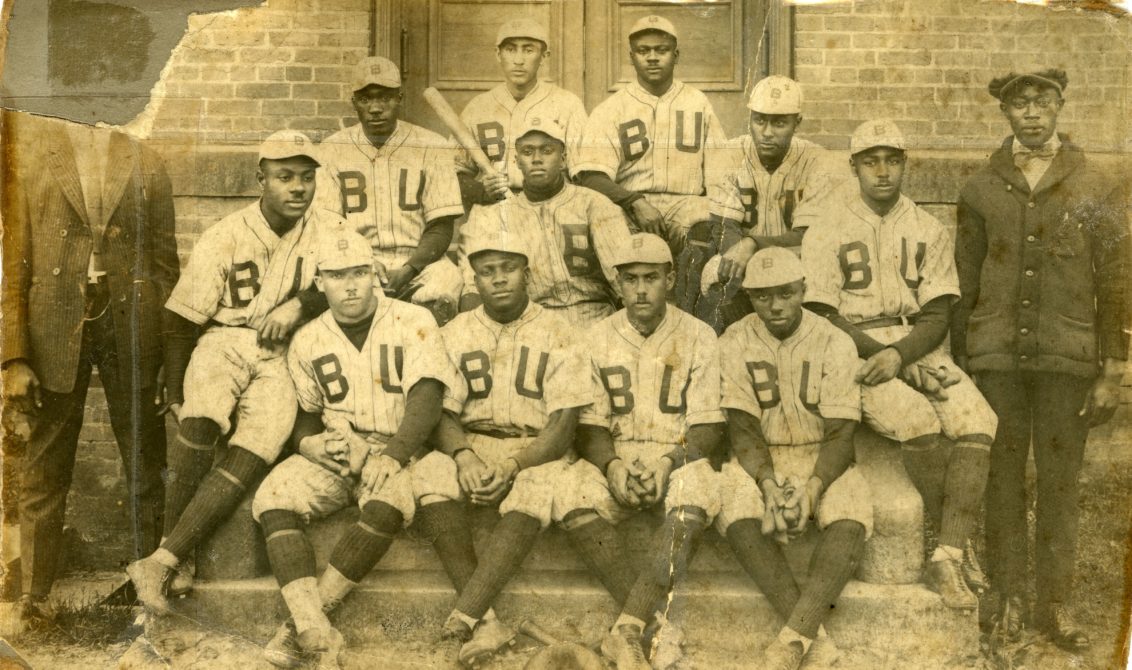 When it comes to the history of Black baseball in Charlotte, this was one of the earliest reported games.

Back in the late nineteenth century, Black baseball players were disbarred from playing Major League Baseball alongside their white counterparts. Baseball was a segregated game where many of the ballplayers who wanted to play competitively either had to organize their own team or league. Many Charlotte Black business owners and neighborhoods established and supported their own teams. These teams were composed of talented players who were obscure to the national media, and most local media. It was around this time that Black ball clubs started to pop up throughout the area and the state of North Carolina.

In the 1910s, Charlotte’s Black baseball began to flourish with teams such as The Biddle Stars, Charlotte Black Hornets, Charlotte Quicksteps, and the Charlotte Red Sox. The Biddle Stars consisted of players from Biddle University (now Johnson C. Smith University) and from the Biddleville community, while the Charlotte Blacks Hornets were a new team that received its name from the local white minor league baseball club called the Charlotte Hornets. During the mid-to-late 1910s, the Charlotte Red Sox were a touted team that claimed themselves as “Champions of Baseball” in the area as well as throughout the state. The Red Sox had a large fanfare that attracted many fans from the area and, during World War I, they led a supportive effort to help support Camp Greene’s Black soldiers. In 1918, on Labor Day, the team hosted a fundraiser where they played against Camp Greene’s Black soldiers at Wearn Field. After the conclusion of the game’s fundraiser, the team was able to collect $249.66 (as of 2021 $1,768.57) which afforded the music band to buy new instruments.

During the roaring 1920s, the Jim Crow era was at its height but this would not discourage many of these baseball clubs from earning extra income. The game of baseball allowed many of these men and teenagers to earn a small lump sum of extra money while playing the sport they loved the most. A majority of the ballplayers had varied occupations working in the fields, textile mills, department stores, and the teenagers still attended school. The baseball clubs scheduled a majority of their games on the weekends and during the holidays, and it was treated as an occasion. Many fans who attended the games treated the event as a community gathering or even a reunion. While in attendance, hats were passed around the crowd to support the local and visiting teams.

World War II created difficulties in consistently maintaining baseball clubs, as many of Charlotte’s Black enlistments were headed to war. In 1947, the Brooklyn Dodgers signed Jackie Robinson to a Major League contract, which led to a trickle effect that allowed other Black baseball players to sign professional league contracts. By the late 1940s, Jackie Robinson was flexing his skills with the Brooklyn Dodgers, and Charlotte had two thriving black baseball clubs: the Charlotte Black Hornets and the Charlotte Red Sox. The Black Hornets were a part of the Negro Carolina League and, in the 1950s, the Red Sox were a part of the Negro National League Association.

During the turn of the 1950s, Black baseball and, in particular, Charlotte’s Black baseball saw a sharp decline in organized team and league play. Nevertheless, through the years, many of the teams were able to thrive while playing in the region. Charlotte and Johnson C. Smith University, in particular, were pipelines for many ballplayers to move on to the professional ranks of the Negro Leagues. The ballplayers that played on these teams were honored with local fame and attention, and became household names in the Black community. Unfortunately, by the late 1950s, the Red Sox and the Black Hornets had to dissolve due to losing many of their players to minor and major league baseball teams.

On December 16, 2020, Major League Baseball acknowledged their wrongs in excluding Black baseball players during segregation, and reconciled with the Negro Leagues and its players by adding the stats to their official record books. This moment in baseball history cemented the legacy of the Negro Leagues for years to come. Recognizing the legends of the Negro Leagues like Josh Gibson, who was known for his hitting prowess, will now become one of the all-time home run kings listed next to Barry Bonds, Hank Aaron, and Babe Ruth. Satchel Paige who was a phenom ace pitcher will be listed among such greats as Cy Young, Christopher Mathewson, and Nolan Ryan as one of the all-time winningest pitchers and strikeout leaders in the game. And Negro League managers such as James “Candy Jim” Taylor and Vic Harris will be among the list of all-time winningest managers in the Major Leagues along with Connie Mack, John McGraw, and Tony LaRussa.

With the inclusion of Negro League baseball player records, these men will finally receive their due recognition, which will bring to light who they were as unsung heroes in the sport. Finally, Major League Baseball is bridging the gap and are now placing these players at their rightful seat at the table.

Since 2002, FloydFest has brought magic to the Blue Ridge Mountains, and it's been quite the odyssey
Next