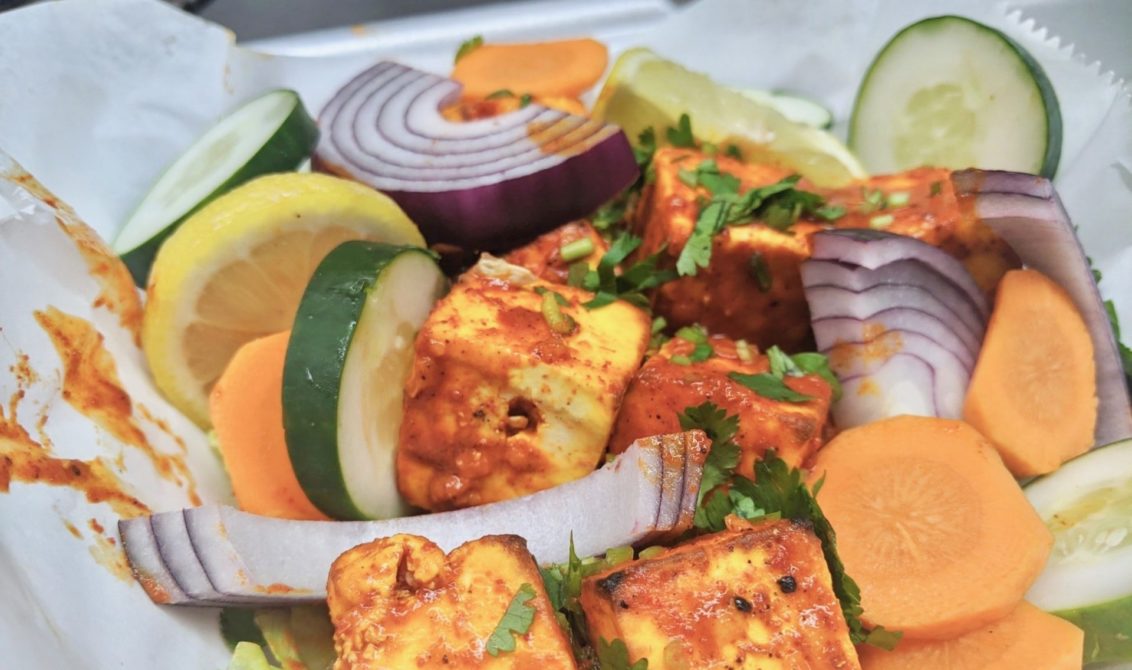 With one of the largest Indian populations in the state, Charlotte has a growing number of Indian restaurants, along with some staples that have been open for nearly 20 years.

India is a country with a rich cultural history that dates back thousands of years, and numerous influences have shaped what we know as Indian cuisine. Food in India has been and continues to be heavily influenced by religion– particularly Hindu and Islam– culture, and tradition. Within India, the vast regional differences in cuisine, shaped by climate and history in addition to religion, have culminated in a diversity of flavors. To group all the regional cuisines of India together under one umbrella is akin to lumping together Carolina-style barbeque with Kansas City barbeque. With Indian cuisine, the food is typically broken down to two main geographic regions, North and South.

Cuisine of North India is prevalent in restaurants in the U.S. and is characterized by rich, milk-based curries, kebabs, and tandoori-cooked flatbreads such as naan, paratha and kulcha. With a cooler climate, these meals are typically very hearty. Common North Indian dishes include butter chicken, palak paneer, tandoori chicken, biryani, chicken tikka masala, samosas and lassi (blended yogurt drink). Lesser known, but equally delicious, are dishes such as chole bhuture, (chickpea curry served with a fried bread), Rogan Josh (spicy lamb curry with a tomato sauce), and jalebi (spiral fried dough, similar to a funnel cake).

South India, on the other hand, has a warmer, tropical climate with its borders formed by the ocean. The cuisine tends to be lighter with more coconut milk curries, highlighting the abundant seafood and rice. South Indian food tends to have a hotter spice level than the North and often includes a bread item like uttapam (fried pancake topped with various vegetables and spices), dosas (similar to a crepe), or vadas (savory doughnuts). Popular entrées include regional-flavored biryanis (such as Hyderabadi region), chicken 65 (crispy chicken tossed in a red chili sauce), and madras curry. South Indian cuisine is not complete without its notorious street food, which has grown in popularity across the United States.

In a country with 22 official languages, the language of food is universal with each dish telling a story in homage to its history.

A newcomer to the Indian food scene in Charlotte, you will find Curry Gate located in an unassuming building in North End. Curry Gate offers quintessential Northern Indian cuisine with curries, and tandoori meats and breads. While the restaurant has only been open six months, its chef, Chuda Dimal, has had his hand in Charlotte’s Indian food scene for years, having worked at Royal Biryani, Maharini, and King of Spicy, to name a few. With velvety curries and crisp tandoori-cooked naan full of spice, Curry Gate is a must for those seeking traditional North Indian cuisine.

Nestled in a strip mall in the University area, you will find Passage to India. While its footprint may be small, its expansive menu explores all of India with popular dishes from both North and South India. Owner Andy Singh and his team have been serving up everything from tikka masala to dosas since 2009. A unique feature of Passage to India is that they only serve halal meats. Prior to COVID-19, Passage to India was well known for its expansive lunch buffet, but for the safety of their guests and staff they have moved to a take-out only service.

Royal Biryani has been serving up traditional North Indian cuisine since 2017 in their cozy restaurant located in the Sardis Woods neighborhood of Charlotte. When deciding what to order, a tip I find helpful is that if a restaurant includes the name of a dish in its own name, you should probably get it. Royal Biryani’s biryani does not disappoint. Beyond the varieties of biryani, Royal Biryani boasts a large menu filled with curries, kebobs, tandoori breads and desserts. Some unique things that set Royal Biryani apart from other Charlotte North Indian restaurants are their appetizers and the fact that all of their meat is halal. Peruse their appetizer list and you find your typical samosas and chaats along with more unique ones such as jaduee gobi (crispy cauliflower tossed in a flavorful, tangy sauce) and kathmandu chicken (crispy chicken and veggies tossed in a spicy sauce), both of which are very popular.

Off North Tryon in the University area, you will find Raj’s Kitchen. Established in August of 2019, Raj’s is not your typical Indian restaurant. A large part of their menu is devoted to street food from all over India. You will still find the curries, tandoori chicken, paneer and chaats of North India, but also street food common to South India. Raj’s offers a variety of puris (deep fried bread), kati rolls (Indian version of a wrap with chicken or paneer stuffed with vegetables and sauces all wrapped in partha), egg-centric dishes and a large selection of desserts. If you are unsure of what to order, try the thali, a selection of various dishes served on a large silver platter.

Located in Charlotte’s Optimist Hall, Botiwalla opened its doors in December of 2020. Focusing on late night Indian street food, Botiwalla offers a fast casual service with a compact menu full of flavor. Botiwalla has a sister restaurant located in Atlanta’s Ponce City Market, both of which are part of the Chai Pani Restaurant Group that also runs Indian restaurant, Chai Pani in Asheville. Chef and founder Meherwan Irani, an Indian native, has earned four James Beard Award nominations on his quest to share his love of Indian street food. Beyond the decor, representative of a traditional Irani cafe commonly found in India, is a menu that offers delectable appetizers, entrees and a variety of rolls similar to kati rolls but use naan as the wrap. While the menu may appear simple, the flavors are not. To crank up the flavor, try adding their house-made hot sauce, mango pickle, desi (creamy Indian spiced slaw) or riatta (lightly seasoned yogurt) to your dish.

Maharani has been a staple in the Charlotte Indian food scene since they opened all the way back in 2002. Owned by New Delhi natives Amandeep and Manjeet Singh, they have kept true to their traditional North Indian roots. In an intimate atmosphere, Maharani offers curries, biryanis, tandoori items, an assortment of tandoori-baked Indian breads and desserts. Uncommon in many Indian restaurants, Maharani offers alcohol, including domestic beer and wine along with a selection of beers imported from India such as Kingfisher, Flying Horse and Taj Mahal. While their popular lunch buffet is on pause due to the pandemic, they do offer two thalis, a vegetarian and non-vegetarian, for those wishing to sample multiple dishes.

If you center your meals around meat, Zafran Kabab Palace (Zafran) is the Indian spot for you. Since 2017, owner Roaz Khan has been serving the University area specializing in North Indian tandoori barbeque with a Pakistani twist. Thumb through the menu and you will find that Zafran offers a truly unique menu devoted to kebabs and other tandoori-roasted halal meats. Not only will you find kebabs, you can also find chicken wings, lamb chops, whole roasted then fried chicken and, elusive to Indian menus due to religious beliefs, beef. Zafran also offers traditional North Indian curries, biryanis, tandoori breads, and desserts. To balance out all of the meat, as is common with all Indian restaurants, Zafran offers a selection of vegetarian appetizers and entrees. While COVID-19 has impeded their notorious lunch buffet, Zafran still offers dine in seating as well as take-out that can be ordered through DoorDash, GrubHub, Postmates and UberEats.

Chatpatay is Charlotte’s first fast casual Indian restaurant. Chatpatay emerged on the scene in 2015 with their first location in Pineville and expanded in 2019 with their second restaurant in the University area. With a menu inspired by the street food of Chaupaati, Mumbai, Chatpatay offers South Indian street food in tandem with common North Indian curries and biryanis for the best of both worlds. Both locations offer nearly identical menus, complete with Indian beer, domestic beer, and wine. In addition to the street food and curries, is their South Indian thali that can be made vegetarian or non-vegetarian.

Last but certainly not least is Charlotte’s premier upscale Indian restaurant, Copper. Located in Dilworth in a renovated 1908 bungalow, Copper has been offering their take on modern Indian cuisine since 2004. Browse their menu and you will find the flavor and spices of India used to prepare non-traditional dishes along with some common traditional North Indian dishes. Copper’s menu offers typical Indian meats such as chicken, lamb and goat along with a good variety of vegetarian dishes, but also a large amount of seafood and even duck. They also host a full bar complete with local beer, Indian beer, and craft cocktails.

'Judas and the Black Messiah: The Inspired Album' features an impressive roster of rap and R&B artists
Previous