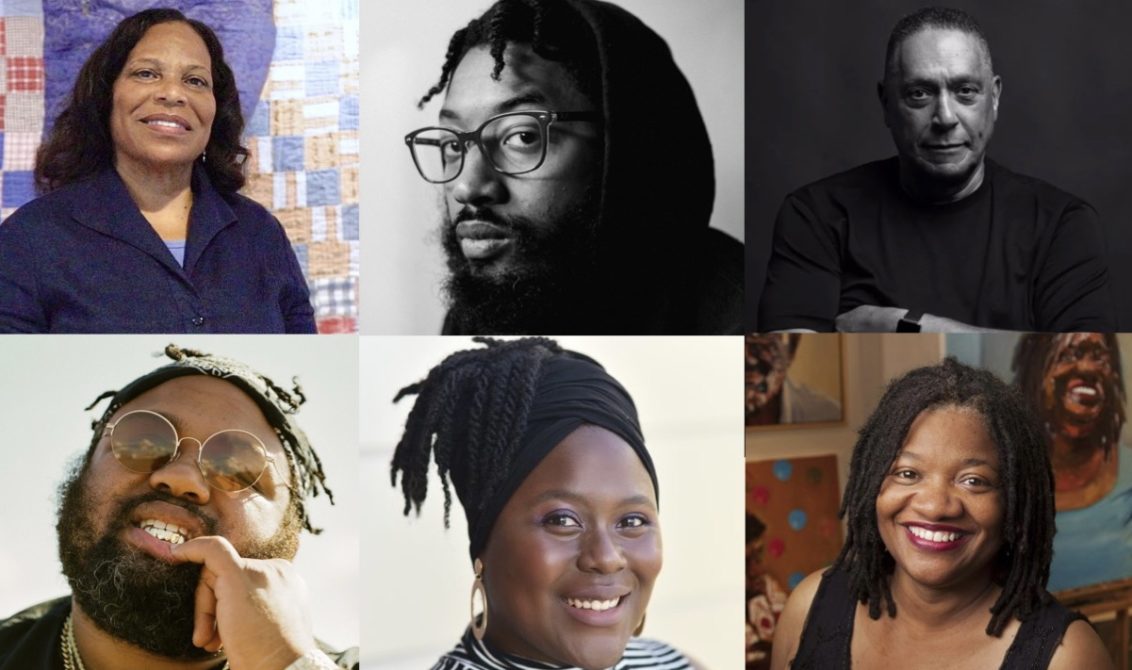 Carolina Complexions is an arts column featuring Black and Brown artists from North Carolina, and we are so excited to continue bringing you this exclusive content. You may notice that the format is shorter than before, which will allow each artist to shine even brighter. This month we are featuring legendary Carolina creatives who are some of the most exciting new talents in the South. All of the artists either have current or upcoming exhibitions where you can see their work in person.

Beverly McIver is a North Carolina treasure. This Greensboro native and contemporary painter has had a truly outstanding career over the last 25 years, and shows no signs of slowing down. McIver’s art has been exhibited all over the country, most recently in Rome, Italy where she took home the American Academy’s Joseph H. Hazen Rome Prize in 2017. She was also the subject of the Emmy-nominated documentary, “Raising Renee.” The film follows McIver’s journey in becoming the legal guardian of her mentally handicapped sister— at the height of her career— after the sudden death of their mother. McIver draws great inspiration from her family in her art, and Renee is often featured in her paintings. McIver is currently the Professor of the Practice of Visual Arts at Duke University.

Full Circle is McIver’s current solo exhibition, which “presents a survey of more than 50 works that demonstrate the diversity of the artist’s thematic approach to painting over 25 years.” Organized by the Scottsdale Museum of Contemporary Art (SMoCA), Full Circle includes a special complementary exhibition entitled In Good Company that showcases many of McIver’s beloved mentors and mentees. Among the featured artists in the special exposition are legendary textile artist Faith Ringgold and fellow North Carolinian, contemporary artist Damian Stamer. Full Circle is currently on view at the Southeastern Center for Contemporary Art (SECCA) until March 2023.

Cornell Watson, a photographer and photojournalist based in Durham, has quickly emerged as one of the Triangle’s most exciting new talents in the art world. He picked up a camera for the first time in 2017 to document his wife’s pregnancy and the birth of their now five-year-old daughter, and shared the journey on social media. Noticing his talent, friends and community members began asking him to photograph their families. Watson then turned his attention to deeper stories unfolding around him during the end of the Trump Administration, and began creating his first professional art series entitled Behind the Mask. The vulnerable and provocative depiction of the fragility of Black life earned Watson the Newhouse School at Syracuse University’s Alexia Grant at the end of 2020, and publication in the Washington Post. Though Watson was laid off from his day job that year, he landed high-profile commercial gigs with T-Mobile and Adidas.

After becoming an artist-in-residence at UNC Chapel Hill, Watson set out on his next story. He used a combination of spontaneous and artistically staged photography to tell the story of the Black community that built, maintained, and was exploited by the prestigious university. But, just hours before the finished exhibition was set to open, administrators pulled the plug. Luckily, the Washington Post published the collection, entitled Tarred Healing, and the whole world could see what the university attempted to hide— a provocative, Gordon Parks-inspired, visual narrative of anti-Black oppression and Black resilience that stretched from the Antebellum period to the present-day. This groundbreaking exhibition has now found a new home at the Chapel Hill Public Library, where Watson’s work will be on display until June 30.

Sir Will The Artist (Will Jenkins) has been electrifying Charlotte’s art scene since he opened BLKMRKTCLT with fellow multimedia artist Dammit Wesley in 2017. Before that the multi-hyphenate creative was hustling as a commercial photographer, stylist, and creative director, earning his stripes in corporate settings. His first break into the industry was the I’m an Artist Dammit event at the Dupp & Swatt art boutique. Two years later, he was the featured artist at Goodyear Arts’ Mood: Black. Since then, he has done everything from photography to music to film.

Sir Will is now putting the finishing touches on his first solo photography exhibition, Breakin Bred. Inspired by Southern culture and his own upbringing in Charlotte, he is pushing the boundaries of artistic event creation. Breakin Bred is an interactive showcase with a curated dinner and drinks featuring chef Calvin Wright. The richness of the collection is replete with gold grills, dirt roads, and lush Southern greenery. The “backwoods swagger” represented in Sir Will’s work speaks to someone who knows the Dirty South like the Black of his hand. Breakin Bred is a ticketed event with limited seating, so hurry and get yours today.

Juan Logan, a veteran contemporary artist of international acclaim, is a Tennessee native whose family relocated to Belmont, North Carolina when he was eight years old. It was there that Logan became interested in art at the all-Black Reid High School, although it took many years for his love for art to reveal itself on his path. He ended his time at Howard University as a chemistry major to study art at Clark College (now Atlanta University). After serving in the Air Force as a jet engine mechanic in the Vietnam War, he attended the Maryland Institute of Art in Baltimore and earned his Masters in Fine Arts in 1998 in painting and mixed media sculpture.

The politics and culture of the South looms large in Logan’s work, as one can observe in his most recent Elegy series, which has been in various exhibitions since 2020. This series of paintings are map-like in nature and comment on ideas of family, hierarchy, immigration, separation, and society. Currently on display at the Nasher Museum of Art exhibit, Reckoning and Resistance: North Carolina Art Now, Logan’s Elegy LXXIII appears to depict a human figure traversing through the night. The bowed shape of the figure created with a collage effect, seems heavy-laden and leaning on what could be a cane or walking stick with a starry night overhead. The tension between the beauty of the South and the ugliness of its oppressive politics and societal norms is expressed through the Elegy series and is often featured in Logan’s other innovative work.

Beverly Y. Smith is a veteran mixed media fiber artist based in Charlotte. Raised in the Queen City of the 1960s and ‘70s, Smith was introduced to patchwork quilts through visits with her Grandmother in South Carolina. “I always felt safe under my grandma’s hand sewn quilts,” she recalls in her artist’s statement, “which took on a rhythmic pattern similar to Kente cloth with vertical strips, bright colors, and asymmetrical improvisation.” A mixture of material conversation, historic preservation, and contemplative beautification, the ancestral tradition of patchwork quilt making left a profound impression on Smith as she sought out her own artistic voice. She came to create a unique style all her own that combines representational portraits drawn in graphite on sackcloth with the classic patchwork elements. The result is a three-dimensional story that is both inviting and thoughtfully challenging to the viewer.

While pursuing her career as a solo artist, Smith was also an arts educator in the Charlotte-Mecklenburg School System for nearly 30 years. During that time she was a part of several exhibitions, including her first solo show in 2007 at Charlotte’s Central Piedmont Community College. Today, you can find Smith’s work all over the country, but most recently at the Still Standing exhibition at the Brooklyn Collective art gallery and Booth Playhouse in Charlotte, as a featured artists in Blumenthal Performing Arts’ Artists in Theaters program. Always a teacher, Smith also hosted a beginner’s quilting class at the Harvey B. Gantt Center in March.