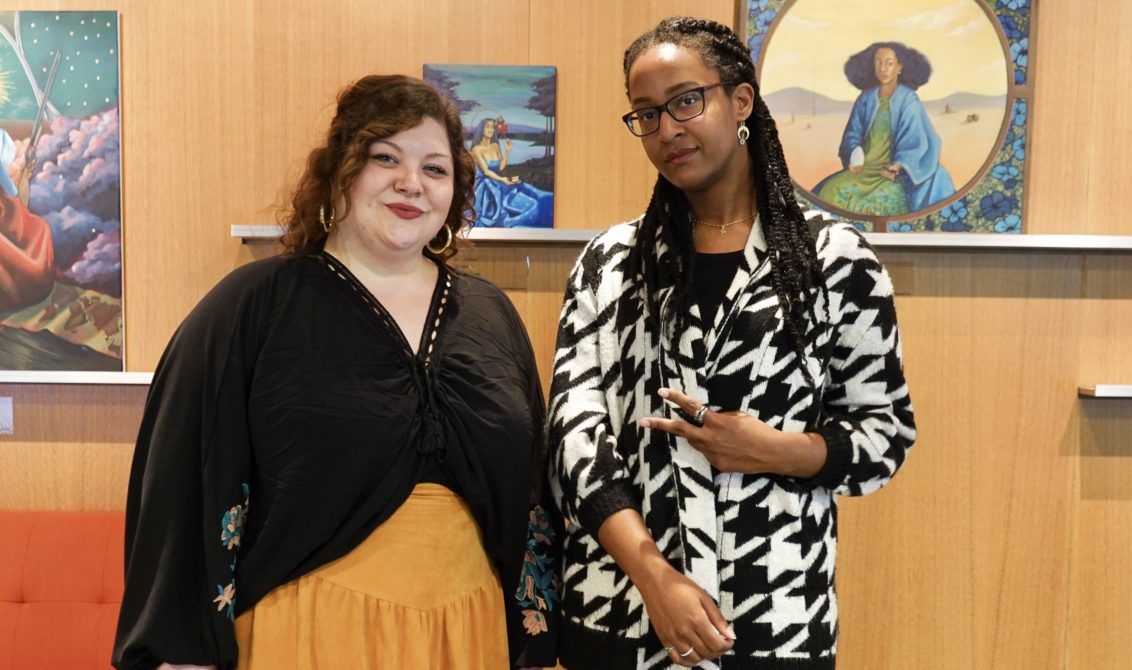 In the summer of 2021, when many in the region were eagerly anticipating the Immersive Van Gogh exhibit in Charlotte, Bree Stallings, Director of Artistic Experiences at Blumenthal Performing Arts had several ideas brewing. While most of the country was reacclimating to being “back outside,” Stallings– who is also a mixed media artist born and raised in Charlotte– was figuring out ways to get fellow artists back creating in the community. Working with over 50 local and regional artists to create boutique merch, murals and sculptures for Immersive Van Gogh, Stallings helped create a micro-economy around the long-running exhibit which helped generate close to a half a million in gross revenues for local artists.

Seeing how cohesively the two worlds of entertainment production and art could work together, Stallings then created the Artists in Theaters program. The program pairs talented local artists with touring musical and theater productions to further integrate the Charlotte arts scene with institutional performing arts.

“They’re two distinct audiences, but they’re interested in the same kinds of narratives. So let’s just bridge the gap and make a venn diagram out of this,” Stallings said.

Starting with the musical Wicked in September 2021, Stallings called on Charlotte artists Tajmah Allison, Gil Horne Jr. and Tiffonye Wilkins to kick off the program. For Ain’t Too Proud: The Life and Times of the Temptations, Jaianna McCants, a local visual artist who uses vinyl records as a canvas, created a Temptations-inspired step and repeat backdrop. For What The Constitution Means To Me— the Pulitzer Prize-nominated play that dissects the U.S. Constitution– Lake Norman artist Doris Kapner created an installation that sheds light on disturbing facts of domestic abuse in our country. Percy King, a mixed media artist who crafts three-dimensional wood works, displayed some of his eye-catching pieces for Jesus Christ Superstar in March 2022.

@breestallingsart♬ The Blues – It Began in Africa – Romare

Beverly Smith, a mixed fiber quilt artist and a retired IB arts teacher who taught at West Charlotte for 20 years, installed some of her intricate quilts in the lobby of Booth Playhouse for the hit musical, Waitress. As the first art gallery-style installation for the Artists and Theaters program, there was shared symbolism between the non-traditional art medium and the musical production: pie. After seeing Smith’s work at Art Basel (specifically a work in Smith’s “Uppity” series called “The Blacker the Berry”), Stallings bridged a connection to Waitress’s main character, Jenna, a pie maker. The quilt incorporates a blackberry pie but also further examines the racial context of the word “uppity.”

“Pie was symbolic of Southern hospitality at one time. It’s like, to welcome a neighbor, you would bring them a pie. My pie has dual meanings, like the black of the berry,” said Smith.

The quilts are stunning works that tell the story of Smiths’ childhood through detailed graphic drawings on a variety of fabrics and textures. Smith started quilting at the age of three with her grandmother, who used old dresses, jeans, and tablecloths– and she even shares some folklore through her captivating pieces.

“There is an African belief as well as an old Southern belief that spirits can exist in fabrics and textiles. And that having patch works and a pattern that doesn’t match up confuses spirits from being able to take over the fabric,” said Smith.

Smith has received tons of new appreciators of her work from the Artists in Theaters program with her quilts displayed in the lobby entrance of Booth Playhouse, where the Waitress had a one-month run. She’s grateful for the opportunity and feels the program should be implemented in cities across the country.

“I just feel like it’s a trend that could happen with other theaters on various levels,” said Smith. “Bree has her hands on what’s going on in the community and this never would have happened otherwise.”

Another local artist displaying artwork at Booth Playhouse is Nill Smith. Smith is a painter whose art unravels the relationship between Europe and Africa, exposing their shared histories and the effects they had on humanity. During the pandemic, Smith, mentally drained from the heavy subject matter of her art, needed an escape, so she started painting cakes and pastries.

Weaving together common motifs and emotions through two parallel art forms, Stallings feels there is an abundance of artists in Charlotte to ignite the city’s creative spirit through events presented by Blumenthal Performing Arts.

“I saw a gap, and we have a wealth of talented artists here in Charlotte. I mean, we are not short on talent,” said Stallings. “It’s happening as it’s going and each show has its own different opportunities.”

Stallings’ goals with the program are simple: get more artists to feel celebrated while enjoying theater programs and get theater audiences more engaged as art appreciators. Stallings hopes to even host an exhibition for all of the talented artists and alumni of the program in the future. But for now, the goal is to continue connecting with local artists to fuse creative ideas with the programming at Blumenthal Performing Arts. Carolina Complexions: Celebrating Black and Brown artists and creatives in North Carolina
Next