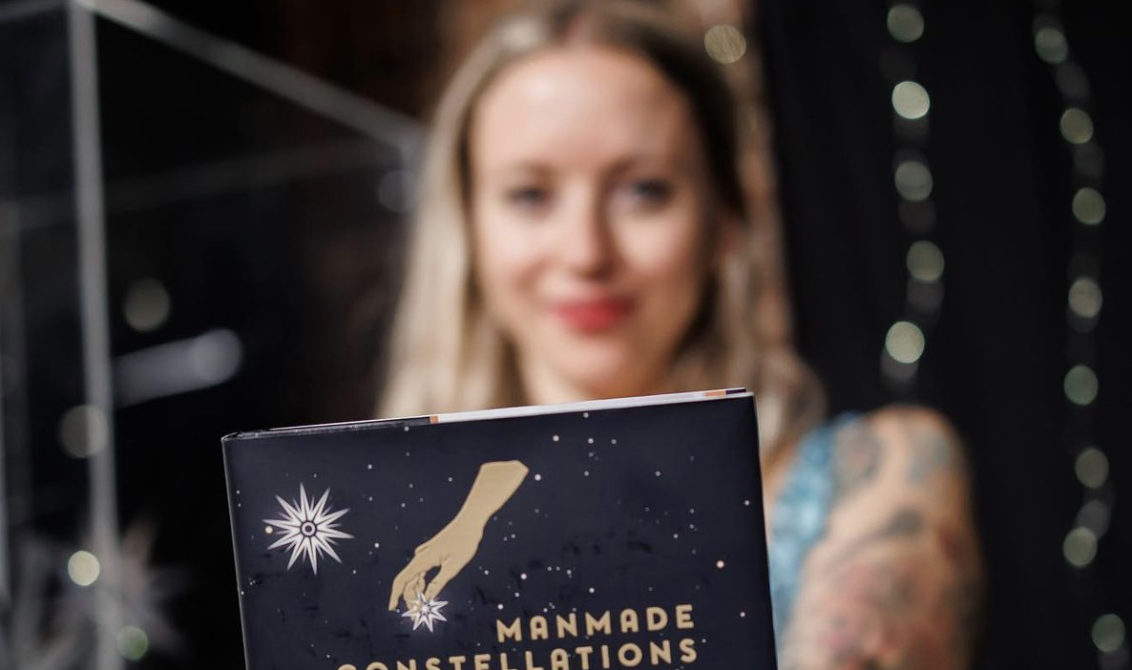 Misha Lazzara burst onto Charlotte’s literary scene last fall with the publication of her debut novel, Manmade Constellations. Released by Blackstone Publishing, the novel drew praise from various literary lions, including bestselling author Jill McCorkle who wrote, “Misha Lazzara is an extremely talented writer with a compelling story to tell. Her dialogue is pitch-perfect and her setting so vivid, you feel you are there.” The reviewer for Publishers Weekly called the book a “notable debut” and concluded the review by saying, “Readers will enjoy this new voice.”

Manmade Constellations is a road trip story of sorts. The novel begins when Lo Gunderson, an alienated young woman from a small town in Minnesota, responds to an ad for a “free car.” When she meets Blanche Peterson, the dying woman who is giving away the car, Lo learns that it comes with a condition. Blanche wants Lo to find her estranged son, Jason. Lo agrees and recruits help from a young car mechanic named John Blank to get the car running. John ends up joining Lo on her quest to find Blanche’s son. For much of the novel, Lo and John experience the American landscape and, in the process, learn a lot about each other. The central characters become more and more complex as the story progresses; they have secrets, difficult family histories, and longings that they don’t fully acknowledge or understand. As a reader, you have a sense you are traveling in the backseat with these characters, and they make for very memorable traveling companions.

Lazzara’s auspicious debut belies the fact it took her years to write this novel. In a recent interview, she traced the origins of the novel back to her childhood.

“I’ve wanted to be a writer for as long as I can remember. When I was eight or nine my mom gifted me the children’s book The Lives of Writers by Kathleen Krull, which highlights the biographies of a dozen or two well-known writers,” said Lazzara. “It was really with that book in my hand that I set my sights on the job title.”

Lazzara started writing an early draft of the novel shortly after finishing her undergraduate degree, but she put the manuscript aside after she moved to Charlotte and started a family with her husband Adam. As she put it, “Life nuzzled in. It felt like I had only been handed my bachelor’s degree in English before I found myself married and starting a family.”

Eight years after graduating from college, Lazzara decided to pursue a master’s degree at UNC Charlotte. She later recalled, “I was pregnant with my third child while my husband traveled for work. With all those responsibilities, I applied to grad school with more logical intentions. The plan was to focus on English, so I might find a job teaching one day down the line, once my own kids were all set up in grade school.”

Lazzara’s plan changed after she started her graduate program. She signed up for a writing workshop taught by author and novelist Aaron Gwyn, and the experience convinced her to switch her focus to creative writing.

After graduating with her Master’s degree from UNC Charlotte, Lazzara entered the MFA program in creative writing at North Carolina State University. “I was almost halfway through my MFA,” she said, “when I had an idea to rewrite that old story–Manmade Constellations–from scratch.”

When asked to describe her novel, she said, “For me, the book is largely a story about home. And for me, Minnesota is home. That’s where I grew up at least.” Lazzara’s familiarity with the small towns and backroads of her home state is evident throughout the novel. The setting is truly integral to the story.

Although Lazzara has been living in Charlotte for nearly fourteen years, she found that she enjoyed writing about Minnesota. “It was cathartic to revisit those old haunts–the lakes, the wood-paneled diners and those flat stretches of highway broken up by even more lakes.”

For the readers of Manmade Constellations, touring Lazzara’s old haunts in the company of her quirky characters is certainly a road trip to remember.

Manmade Constellations is available via your local bookstore, Barnes & Noble, and Bookshop. For readers who want to learn more about Misha Lazzara, check out her official website.

Mark I. West is a professor of English at UNC Charlotte. He also writes Storied Charlotte, a weekly blog that celebrates Charlotte’s community of readers and writers.

Want to win two tickets to see Death Cab for Cutie in Charlotte?
Next