There’s a sense of joy that comes with sharing your hometown with others– it’s a window into your own upbringing, a glance into the people and places that helped shape your credence and your character. Perhaps that’s part of why Warren Haynes started the legendary Christmas Jam in Asheville, North Carolina 34 years ago. What began as a small, locally focused event at the now defunct venue, 45 Cherry, has blossomed into a national hotspot for iconic artists of all genres to collaborate in the name of charity. Haynes, best known for his work in Gov’t Mule and as the longtime guitarist of the Allman Brothers Band, curates the annual event, which returns after two years of Covid closures. This year’s lineup boasts acts like Phil Lesh & Friends, Tyler Childers, Brothers Osborne, Dinosaur Jr., Gov’t Mule, Hiss Golden Messenger, and more.

The hot ticket typically sells out in minutes, with proceeds benefiting the Asheville area Habitat for Humanity. Since its inception, Christmas Jam has raised nearly $3 million for the organization. With alumni including The Allman Brothers Band, Dave Grohl, Coheed & Cambria, The Doobie Brothers, Allison Kraus, and countless others, Haynes casts a wide net that attracts music lovers of all varieties.

“The most important thing for me is to present a night of music that is very diverse,” Haynes said, “but also one that appeals to a [certain] type of listener… someone who considers music to be a big part of their lives.” With everything from rock, bluegrass, jazz, funk, country and soul, Christmas Jam is an all-inclusive event focusing heavily on a sense of community. Having grown up in Asheville, Haynes has long been surrounded by open-minded individuals who strayed from the beaten path, people that, he said, “didn’t depend on mainstream pop culture to influence them…People that were willing to reach out and discover great music in as many different genres as possible.”

By building an eclectic lineup, Haynes has made his annual event one that mirrors the very city that helped build him into who he is today. While this marquee event hosts some of the most revered acts of modern music, the Jam keeps a tight focus on the pulse of Asheville– thanks in part to events like “Before The Jam, Lend A Hand” and “Christmas Jam by Day.”

Before The Jam, Lend A Hand provides a community-focused opportunity for attendees and musicians (including Haynes and his wife) to get their hands dirty building Habitat homes. “It’s such a beautiful community feeling to be out there,” Haynes said. “There’s so many people volunteering their time as carpenters, plumbers, contractors, or just people that say, ‘I’m here for whatever you need me for.’ It’s a wonderful opportunity for people to connect and feel a little bit closer to the cause.”

Alongside Before The Jam, Lend A Hand, Christmas Jam By Day transforms downtown Asheville into a SXSW-esque festival full of pop-up shows and art galleries. The daytime events allow tourists coming in for the Jam to catch a glimpse of what makes Asheville such a hotbed for artists and music lovers across the country. “There’s so many people coming from out of town or out of state,” Haynes said. “it’s important for them to have options and discover parts of Asheville that they probably wouldn’t know about.”

This intention to explore is what helps to make Haynes’ Christmas Jam such a special event; there’s a partnership between the artists, attendees/volunteers, and the host city that helps to make it truly magical. “Those collaborations are some of the best parts of the entire event,” Haynes said. “I’ve seen so many beautiful collaborations…When people come together for a cause like this, it has its own specialness you know? You see people meet for the first time backstage, say ‘Hey why don’t we do something together?’ and then you hear a year or two later, they’re still doing things together that were born that very night.”

Throughout the three decades of the Christmas Jam, iconic partnerships have been forged. It’s where Branford Marsalis first collaborated with Dave Matthews and Marty Stuart, Jackson Browne played with legendary keys player Bernie Worrell, The Grateful Dead’s Bob Weir first collaborated with Allison Krauss. These organic, once-in-a-lifetime collaborations are what keep people flocking to the event.

But regardless of all the Grammy-winning artists on stage or the barn-burning jam sessions, the sense of community is what makes it feel like such a special event.

“I’ve gotten a lot of pressure to move it out of Asheville and make it a larger scale event, but it just never seemed appropriate,” Haynes said. “The event has always been about Asheville, and we’ve all seen Asheville grow over the past twenty years and turn into this beautiful place that people from all over the world want to come [and see].”

And why wouldn’t you continue to host an event in your hometown that brings nearly 10,000 eager music lovers together and raises millions of dollars for your local community? For an event like Christmas Jam to sustain monumental growth and a hyperlocal focus is something truly unique. And throughout it all, the founder remains humble and grateful to the town that shaped him: “Having gone through these past few years, I think the whole world kind of feels like, you know, it’s more important than ever to think of what we can do to help the situation and to help each other.”

Warren Haynes’ Christmas Jam is sold out, but will be available to livestream through Volume.com. Tickets for the livestream include the main event on Saturday, December 10 and the Pre-Jam on Friday, December 9 at The Orange Peel. Tickets to the Christmas Jam By Day shows are $20 and will be available for purchase at each of the venue’s box offices. 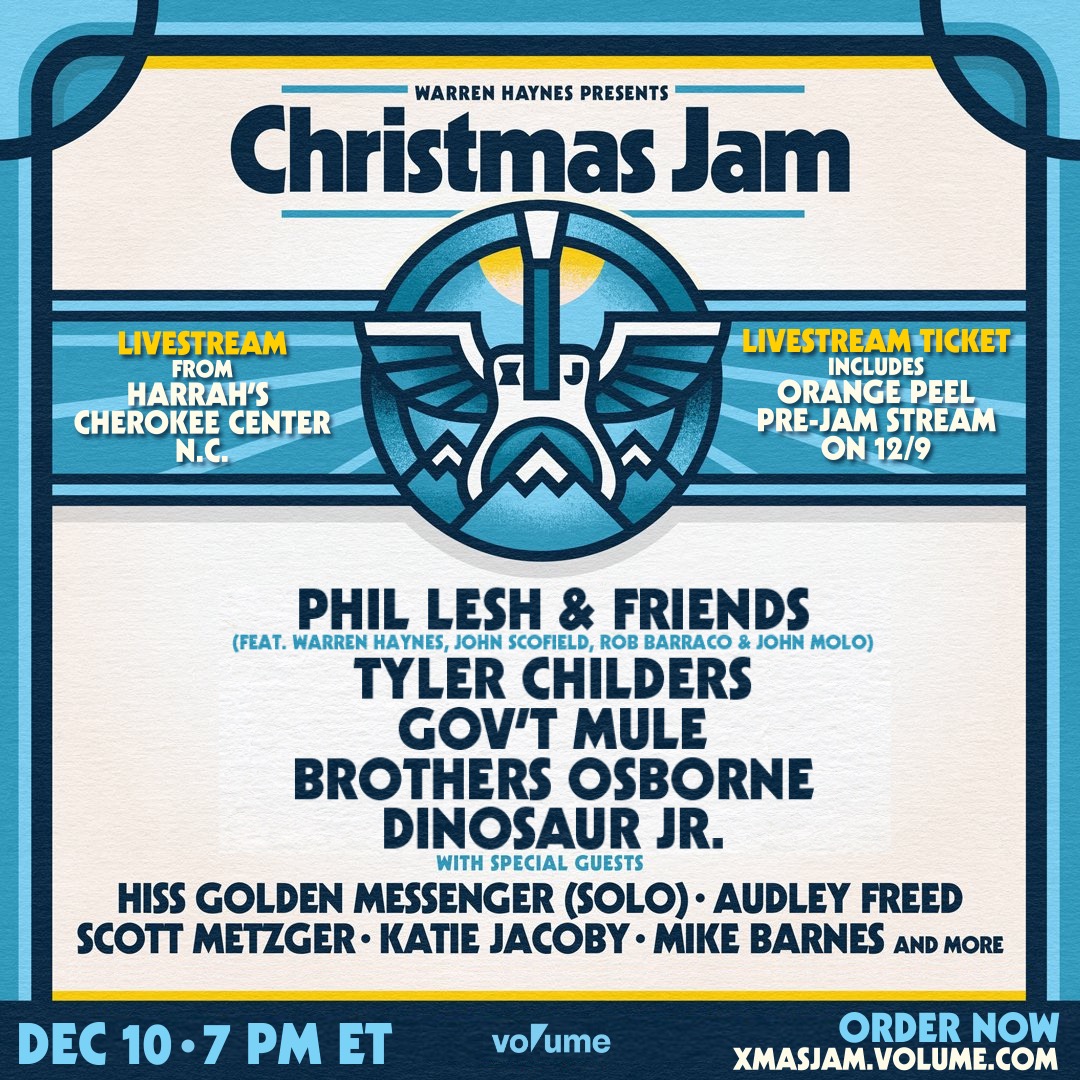