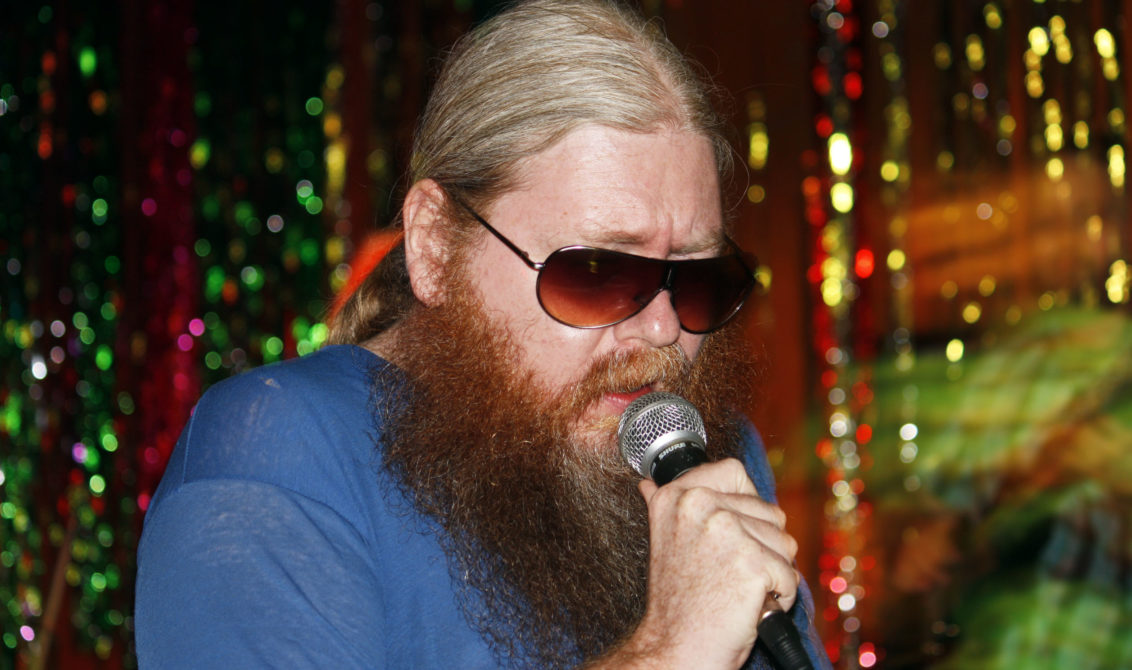 In a 2011 Rolling Stone article, legendary singer-songwriter Jackson Browne said Hughes is “an unbelievably good singer-songwriter. He looks like he stepped out of the back cover of an Allman Brothers record in 1975. He’s wickedly funny but also utterly romantic.” Browne even brought Hughes on stage in Charlotte at Belk Theater in 2012 to perform “All You’ve Got To Do Is Fall In Love,” from his lauded debut studio album, A Love Extreme.

Hughes’ resume reflects the career that many songwriters covet, but for most Charlotteans who lived in the city during the ‘90s, his music triggers memories of simpler times, when Muscadine— a band formed with another Charlotte native and songwriter, Jonathan Wilson (Father John Misty, Dawes, Chris Robinson)– ruled the city. When venues like Tremont Music Hall, Pterodactyl Club, Fat City and The Double Door Inn were the places to be for live music.

“I got my first gig at The Milestone. Penny Craver, she gave me my first, you know, gig as a solo act,” Hughes said.

As a child, Hughes split his time between Charlotte and the small town of Greenville, Tennessee. But it was in Charlotte where his musical ambitions were sparked.

“When I was 12, I found a guitar, like an acoustic, kinda like a cheap plastic guitar kind of thing at my aunt Maxie’s house, she lived out in the country out in Harrisburg. I got that thing, and I just started going off on it,” Hughes said. “And then my dad saw that I was into it and he put a guitar on layaway for me. It was like a Kay Starter Series guitar and Guerrilla Amp. It was $144 to get it out. And I had this little layaway ticket. I would take that and just do jobs around like mowing yards and stuff like that so I could get my prize.”

At the age of 14, Hughes was in his first band, Smash Action (a name he proudly came up with). The band consisted of members much older than him, and they played mostly Motley Crue and Guns N’ Roses covers in the small city of Greenville, Tennessee where there was only one seedy music venue called Nobody’s Business.

“My dad lived in Tennessee and my mother lived in Charlotte. So I would go back and forth, you know, and when I realized that I could be in a band up there. I was like, I’m gonna go chill up here for a while.”

Hughes came back to Charlotte when he was around “driving age,” and was reintroduced to a revived music scene.

“Sugarsmack was a band that was in town. And they were my jam,” said Hughes. “The guitar player Chris [Chandek], the drummer John Adamien. And you know, of course, Aaron [Pitkin] and Hope [Nicholls], it was just great.”

When Hughes formed his own band, Muscadine, with the talented multi-instrumentalist and producer Jonathan Wilson, they paid homage to Sugarsmack by naming their album, The Ballad of Hope Nicholls. Nicholls owns Charlotte clothing boutique Boris & Natasha, which used to sit down the street from the abandoned Dairy Queen in Plaza Midwood that Hughes sings about in “You Stood Me Up” from his debut album, A Love Extreme.

Muscadine was also very eager to get their name out there, pushing the limits of old school marketing methods, flooding the street with show fliers.

“We might have been responsible for them changing the flier laws in Charlotte…we were off the chain,” said Hughes. “And then I’ll tell you what, after a couple of years, every record label that you can think of came to this town. We didn’t go to them. They came to us.”

Muscadine’s sound was somewhere between Stone Temple Pilots and Smashing Pumpkins, but way more garage-y. The band was signed to Sire Records/Warner Bros. by Seymour Stein (a legendary record executive whose label signed The Ramones and Talking Heads in the ‘70s), who released Muscadine’s debut in 1998. If you listen to it today, you’ll be astounded by the composition of the songs. Wilson’s ability to utilize the murky distorted guitar in the post-grunge era, combined with Hughes’ versatile melodies, self-effacing but charming lyrics, and wistful voice makes The Ballad of Hope Nicholls a captivating listen to this day.

The band was short-lived though, not because of some epic breakup, but more due to a natural progression of musical styles, according to Hughes.

“We’re still pals [Jonathan Wilson]. We’ve always been pals. We were never like, you know, ‘we’re breaking up,’ it was just like, the weirdest thing, we got into different zones,” Hughes said. “I got into wanting to learn how to play keys and stuff, you know, and I didn’t want to play like rock as much.”

Perhaps it was his affinity for synth-soaked music of the ‘80s that had Hughes daydreaming of writing the perfect pop song. So, he started learning how to play a Rhodes electric piano and the Wurlitzer.

“[The] ‘80s is the best era for singles ever. Some of my favorite stuff is absolutely, you know, Motown, Stax, Phil Spector stuff like that, of course, but the ‘80s was like the pinnacle of the single… the diversity in the ‘80s is insane,” Hughes said.

Recalling memories of listening to American Top 40 with Kasey Casem on Sunday mornings, Hughes has a tender affection for that era.

“I was really into everything like, you know, Janet Jackson, Madonna, Nu Shooz…I did that whole thing where you could use a penny and get a bunch of tapes…Peter Gabriel’s So, Janet Jackson’s Control, Brothers in Arms [Dire Straits], Born in the USA [Bruce Springsteen]…I just really dug all of it.”

Hughes went on to sign with New West Records (Dwight Yoakam, Jason Isbell, Sara Watkins, Nikki Lane) to release a solo project. He moved to Los Angeles to record songs with Keefus Ciancia– a longtime collaborator with T-Bone Burnett– on his debut studio album. Famed writer Chuck Klosterman wrote in a 2009 review of the album, “It’s almost like A Love Extreme is a project: at various fleeting moments, he sings a little like Julian Casablancas, Joe Pernice, Leonard Cohen, Jarvis Cocker, Rivers Cuomo, Chet Baker, Mark Oliver Everett, and Mark Sandman.” He also earned four stars from a Rolling Stone review and appeared on Jimmy Kimmel Live in 2009 performing “Vibe so Hot” and “The Mummy” wearing a cape, but there’s no quality footage of it anywhere online (here’s the best we could source). He’s even been immortalized in a Jeopardy question.

In the years following the release of A Love Extreme, Hughes spent his time writing songs for television shows like How I Met Your Mother, Chuck, and Eastbound & Down, where he penned the song “Kenny.” He worked with the actor Jeff Bridges on his self-titled album in 2011, making a rollicking cameo in his music video for the song “What a Little Bit of Love Can Do.”

In 2014, Hughes released albums XXOXOXX and OXOXOXOXOX as a part of a four-CD set including LILILIL, a children’s concept album set in outer space, and Songs in the Key of Animals, which was later picked up by the iconic Durham indie-rock label Merge Records (Arcade Fire, Dinosaur Jr., Ex Hex, Conor Oberst).

“As far as Merge goes, those cats are like, so fucking cool. If there is a cooler label in the world, please tell me what that label is called,” Hughes said. “Just to be on Merge was like a dream for me. And it happened.”

While the album didn’t receive the critical praise of A Love Extreme, he amassed millions of listens on fetching tracks like “Freaky Feedback Blues” and “Fall Me in Love,” which features longtime friend and collaborator Mary Wood, music composer and owner of Frisbie, the music production firm where Hughes wrote jingles.

Hughes spent most of his time in Charlotte during the pandemic and released Spirit Guide, a collection of songs he wrote in 2016. It was released as a 47-minute single so that ironically “people that don’t pay for Spotify Premium can listen to the whole thing all the way through without having to hear a commercial.” He also re-released XXOXOXX and OXOXOXOXOX under the names Another Extreme and A Lovers Extreme in May 2020.

“Another Extreme is really like A Love Extreme Jr. If you think about it, like it’s the same cast…It’s basically like an extension of that,” he said.

During our nearly three-hour conversation, Hughes was extremely candid. While a considerable portion of our chat was “off the record,” we shared our appreciation for NWA’s Straight Out of Compton, comedians George Carlin and Dave Chappelle, and he recommended music from his time growing up in Charlotte, like Randy Burke and Todd Busch (Buschovski).

Hughes doesn’t seem to revel in a lot of his accomplishments as an artist and songwriter, but he does perk up when talking about performing again.

“I want people to be excited about going out, and have fun. I haven’t played a show in like, over a year,” he said. “Peter Gray, David Kim and Stacy Leazar (Muscadine) that’s been my Charlotte band for years. I love hanging out with them, it’s gonna be fun just to have all of them together in the same place so we can laugh.”

While Benji Hughes may be the best songwriter you’ve never heard of until now, he isn’t complicated. He’s mainly about the “vibes”– bringing smiles to people’s faces and bearing his soul both vocally and physically on stage, often shirtless, and usually dressed for the beach at his live shows.

Thursday night at Neighborhood Theatre should be no different, bringing together Charlotte music lovers new and old. In a city that is sometimes unrecognizable due to massive growth and construction, we can rely on one of the city’s musical gems, Benji Hughes, to always be the same.